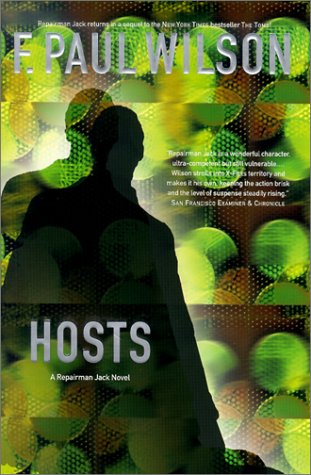 Wilson's latest Repairman Jack thriller (after ) shows the long-running series still creatively malleable and full of surprises. Each begins with the identity of the latest person to seek the urban mercenary's unorthodox skills: his beloved sister Kate, who's unaware at first it's her younger brother's job to "fix" problems and injustices that fall outside the usual legal boundaries. Kate asks Jack to investigate an apparent cult that her lover, Jeannette, has fallen in with while recovering from experimental viral treatment for a brain tumor, and Jack finds that the virus, tainted with a contaminant that has made it sentient, is organizing infected human hosts into "the Unity," a hive consciousness single-mindedly devoted to spreading itself throughout the world. Though the Unity's insidious ramblings about the joys of collectivism recall classic SF parables of communist mind control, Wilson swathes Unity's rhetoric around several interlocking subplots—Kate's coming out as a lesbian, Jack's avoidance of a crusading reporter whose efforts to lionize him in print would destroy his anonymity—to leaven the fantastical intrigue with provocative observations on the roles that individuality, privacy, self-interest and self-sacrifice play in our society. Wilson's fans, who know to expect nonstop action and a hero who can seem a "cryptofascist comic book character," will no doubt be pleased by the more humanized Jack on display here, as well as an ending that packs an emotional wallop even as it sets the stage for his next eagerly anticipated adventure.