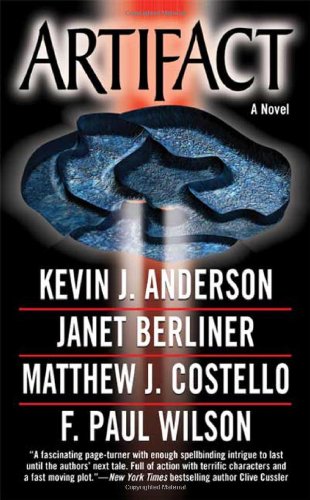 Given the formidable talents of the writers involved, this first adventure of a club of professional thrillseekers is a surprisingly unfulfilling affair. The six male members of the Daredevils Club meet every New Year's Eve to swap stories about the past year's missions impossible. In 1999, oil magnate Frik Van Alman sows the seeds for the following year's bragfest when he asks his fellow Daredevils to help him recover pieces of an unearthly artifact he discovered while drilling in an undersea cavern. Never mind that the devious Frik doesn't tell them the artifact can harness energy magically, or that its parts were deliberately disassembled and dispersed to different people by one of his employees (whose death Frik hastened) to keep it out of his unscrupulous hands. The Daredevils are off and running, and the scavenger hunt that follows is as disjointed as the artifact itself, split over subplots involving an ecoterrorist group's efforts to destroy Frik's oil business and the growing suspicion of Dr. Peta Whyte, lover of a deceased Daredevil, that Frik will stop at nothing to get what he wants. Explosions, death-defying feats and Houdini-like disappearances and reappearances keep things lively. But there are also enough convenient coincidences and key mysteries left unexplained to raise doubts about how closely the authors collaborated on the plotting.