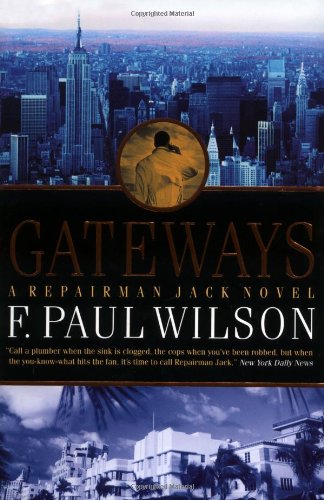 As in his last Repairman Jack novel, (2002), Wilson deftly contrasts the self-imposed isolation of his vigilante hero with the forced exile of society's outcasts. When he learns that his estranged father is in a coma after a car accident, Jack travels to Florida, where his father has been living in a retirement community, Gateways South, which encroaches a bit further into the Everglades than the brochures would have you think. Jack soon has another run-in with what he calls "the Otherness," a Lovecraftian evil that here pervades a lagoon and the community of mutated rednecks surrounding it. Wilson is unsurpassed in depicting his characters' feelings of alienation as they attempt to comprehend the cosmic forces that have misshapen their lives. Particularly vivid is Semelee, an albino woman-child who achieves a certain degree of domination over her mostly male brethren by virtue (or lack thereof) of her sexuality. Jack's reconciliation with his father, along with the discovery that his father is also no stranger to the finer points of violence, could have been maudlin in the hands of a lesser writer, but Wilson provides just enough conflict between the two to allow their newfound love for each other to be convincing. This one will appeal to horror aficionados and to fans of Carl Hiassen and James Lee Burke.