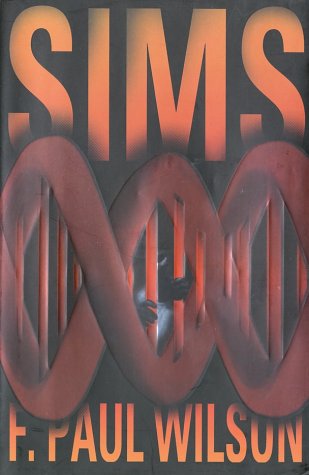 What started as a series of three inventive and exciting novellas by SF veteran Wilson has now become a single volume, complete with two new sections and a creepy, satisfying ending. In the near future, sims—chimpanzees enhanced with human DNA created by a company called SimGen—are used as cheap labor and medical guinea pigs while denied even the right to family. Patrick Sullivan, a labor lawyer, and Romy Cadman, an activist, team up to change the classification of sims from property to persons in order to improve their treatment and to bring SimGen's shady beginnings to light. In the fourth part, the search for the missing pregnant sim from the third novella, (2002), intensifies as further implications of her baby's nature emerge. The reader at last is able to follow the thoughts of Zero, the perpetually masked reclusive genius behind the effort to destroy SimGen, and, eventually, to learn his identity. Portero, the unreliable SimGen enforcer, finds his life spiraling out of control as Patrick and Romy continually gain ground with the help of newly discovered and somewhat disconcerting friends. Each section adds intrigue, portents of doom and layers to the characters—good and bad. While he neatly ties up all the loose ends in his frighteningly possible world, Wilson offers no simple answers.