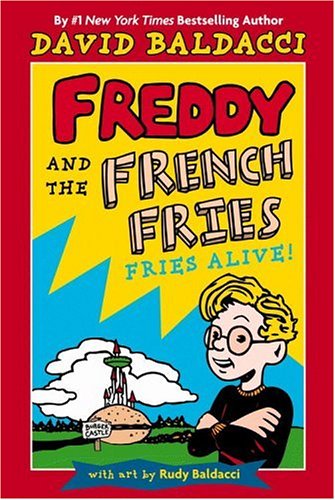 Bestselling adult novelist Baldacci ( ) limps into children's fiction with this inane tale launching the Freddy and the French Fries series. The premise has comic potential, as the author introduces the eccentric Funkhousers. Aspiring scientist Freddy, his wacky inventor father and his 13-year-old Shakespearian quotations–spouting sister dress up (respectively as a chicken, tomato and ketchup bottle) to work at their restaurant, Burger Castle, where "almost no one ever came to eat... unless it was by accident." Located across the street is a snazzy burger place (Patty Cakes) with amusement park rides and a movie theater; the owner (who is also the police chief and mayor) and his thuggish son Adam are preparing an elaborate float for the upcoming parade competition they perennially win. After Adam and his gang attack Burger Castle with paint guns, Freddy is determined to seek revenge. He uses "his father's super secret potatoes and nanotechnology," to create five brightly colored, human-size French Fries. The plot plummets from here, as the rowdy Fries help Freddy and his best friend Howie Kapowie humiliate Adam and his pals and use their powers to clinch the float prize for the Funkhousers. Kids who can't resist references to "butt" and "poop" will find plenty to guffaw at here. Yet most readers may feel that these Fries make for less-than appetizing, curiously bland fare and pass on a second helping. Ages 8-12.