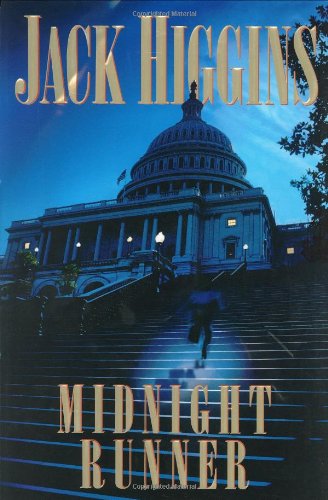 "Death is the Midnight Runner" goes the Arab proverb that gives Higgins's latest its name, but the title could as well refer to the book itself, swift and coursing with dark passion. A sequel to last year's electrifying , this 33rd novel from the bestselling author finds the usual Higgins crew—most notably, former IRA enforcer Sean Dillon and his present boss, Gen. Charles Ferguson, head of a super-secret British agency answering only to the prime minister—responding to various revenge gambits by the beautiful and fabulously wealthy half-bedu, half-English Lady Kate Rashid, countess of Loch Dhu and head of the Rashid Bedu tribe of Hazar, whose three brothers were killed by Dillon and his comrades in the earlier book, after, among other acts of infamy, a Rashid assassination attempt on U.S. President Jack Cazalet. Kate first goes after U.S. Sen. Daniel Quinn, sent by Cazalet to England to investigate Kate and her operations, by seeking to discredit the senator's daughter in a drug scandal, but the young woman dies from the drugs given her without her knowledge. Quinn, seeking his own revenge, induces Dillon and company to confront Kate, no problem when they learn that her master plan involves blowing up a bridge in Hazar desert, thereby disrupting world oil flow and plunging the globe into economic crisis; and, of course, Kate wants to kill Dillon and his pals as well. The action rolls from grand London hotel dining rooms and Oval Office to the Hazar desert, and mostly it's as clipped and brutal, as credible and steel-hearted as Higgins's best; only the absurd final duel between Dillon and Kate, a showdown that feels more scripted than lived, keeps the novel from matching that best.