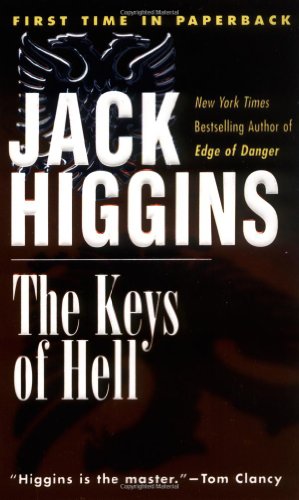 THE KEYS OF HELL

Originally released in the U.K. under the pseudonym Martin Fallon, this newly revised, long-lost gem from 1965 follows the exploits of British agent Sir Paul Chavasse, a James Bond–like hero who is a frequent player in Higgins's early novels (, etc.). The novel opens in the present day with a much older Chavasse, now the Belfast Bureau Chief, preparing to meet Mafia Don Tino Rossi. En route, he's waylaid by Rossi's "nephew," Mario Volpe, who claims to be acting on his uncle's behalf. Volpe hands Chavasse a report describing one of the former agent's 30-year-old assignments. As he reads, Chavasse is transported back in time to a communist-torn Albania, where he and his friend and covert colleague, Guilio Orsini, are engaged in helping the sexy but duplicitous Francesca Minetti rescue a religious icon believed to have miraculous powers. While recalling their near-death chase in the Buene Marshes, Chavasse wonders how this past escapade connects to the Rossi family. Higgins's characters are only marginally developed, but he deftly weaves past and present-day adventures together with sparse exposition and maximum action to create a tale that will delight his many fans.