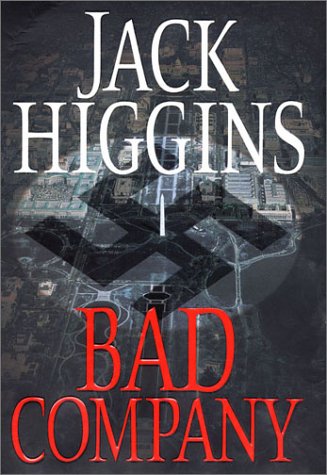 Humdrum company would be a more accurate title. This sequel to Higgins's last, ripsnorting yarn, , is mostly a by-the-numbers effort, though the numbers do speed by. The novel, the author's 35th, begins promisingly, playing to Higgins's greatest strength, WWII action. Young Baron Max von Berger, entrusted by Hitler during the last days of the Third Reich with his diary as well as the key to a vast fortune in Swiss banks, makes a daring and exciting escape from the Führerbunker. But once the narrative leaps toward the present, it begins to flag, with a second setup (including a nifty Saddam cameo) explaining why and how the baron inherits the wealth and power of the Rashid family, the Arab oil kingpins destroyed by Higgins's customary antihero, Sean Dillon, in the last book. Problematic is Higgins's use of von Berger and his thuggish son as villains here; they lack the evil charisma of the Rashids. To avenge the death of the Rashids, von Berger targets Dillon and his master, British black ops commander Gen. Charles Ferguson, who fights back with the help of the usual crew of "hard" men, including computer whiz Major Roper, White House black ops chief Blake Johnson, London tough guys Harry and Billy Salter, et al. Matters pick up a bit when von Berger's son kidnaps General Ferguson to Germany, but Dillon's rescue attempt whips by much too quickly, as if Higgins were hurrying to finish this book and get on to number 36. The author's fans will find enough gnarly action and sentiment here to make them anticipate his next, but this entry is sub par and the series as a whole could use a kick in the spine.