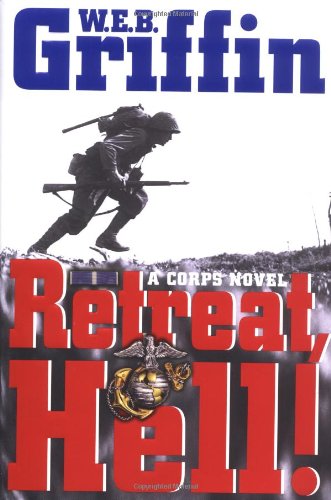 Megaseller Griffin ( ; ; ) musters another solid entry in his series chronicling the history of the U.S. Marines, now engaged in the Korean War. Gen. Douglas MacArthur, nicknamed El Supremo by his subordinates, is taken by surprise when the North Korean Army surges south across the 38th parallel. After early losses, he rallies his troops and stems the tide, but not for long. Intertwining stories of literally an army of characters reveal how MacArthur and his sycophantic staff overlook the entire Red Chinese Army, which is massed behind the Yalu River and about to enter the war. Brig. Gen. Fleming Pickering attempts to mediate the ongoing battles between feisty, give-'em-hell Harry Truman and the haughty MacArthur, while worrying about his pilot son, Malcolm "Pick" Pickering, who has been shot down behind enemy lines. The introduction of the Sikorsky H-19A helicopter into the war by Maj. Kenneth "Killer" McCoy and sidekick Master Gunner Ernie Zimmerman details the invention of tactics that will become commonplace in Vietnam. Readers looking for guts and glory military action will be disappointed, as barely a shot is fired in anger, but fans of Griffin's work understand that the pleasures are in the construction of a complex, big-picture history of war down to its smallest details: "There were two men in the rear seat, both of them wearing fur-collared zippered leather jackets officially known as Jacket, Flyers, Intermediate Type G-1." Veterans of the series will enjoy finding old comrades caught up in fresh adventures, while new-guy readers can easily enter here and pick up the ongoing story.