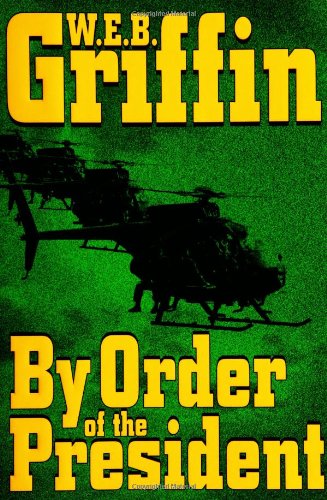 BY ORDER OF THE PRESIDENT

Proving himself solidly in control of cutting-edge military material, Griffin bases his new series not on wars past but on today's murky exigencies of terrorism and international political intrigue. Army Maj. Carlos Guillermo Castillo, whose Spanish name belies his fair-haired, blue-eyed appearance (he had a German mother), is working as a special assistant to the secretary of homeland security. Because of post-9/11 concerns, when a Boeing 727 is hijacked from a remote airport in Angola, it becomes a top priority for the U.S. government. Vicious infighting between several agencies results in a snafu that leads the U.S. president to assign Charley Castillo to use the search for the plane as an excuse to launch an investigation into the internal workings of all the government agencies and personnel who need to cooperate in terrorist situations. Griffin is more interested in military procedure than in blood, sweat and derring-do, and he resists no urge to meander through scores of pages of backstory to round out the many characters who will be series regulars. In the end, there are a few bodies to account for, but its' the meticulous investigation that leaves readers standing on the tarmac waiting for Charley Castillo and his newly minted band of can-do compatriots to touch down and carry them away again on a new adventure.