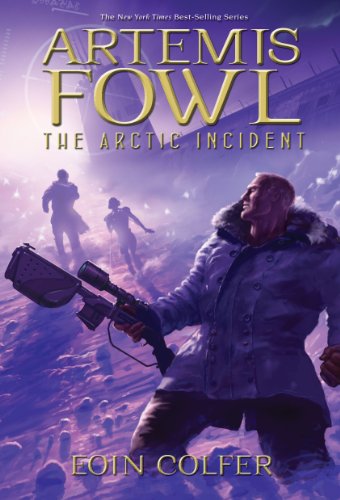 Rocketing readers back into a world of modern fairies (they pack heat and wear motorized wings), Colfer here reunites 13-year-old antihero Artemis with his former kidnap victim, Captain Holly Short, an elf officer with the LEPrecon (Lower Elements Police Reconnaissance) squad. As the erstwhile arch enemies join forces to squelch a power-hungry pixie's coup attempt in one world and to rescue Artemis's long-missing father in another (he's being held for ransom by the Russian Mafiya), the boy proves he has a heart after all, even as he builds his reputation as a world-class criminal mastermind. Once again, the roller coaster of a plot introduces a host of high jinks and high-tech weaponry as Colfer blends derring-do with snappy prose ("The broad grin disappeared like a fox down a hole") and repartee ("Hey, Mulch, if you listen really hard you can just about make out the sound of nobody giving a hoot"). The resulting fantasy hosts memorable characters, many of whom (such as the flatulent dwarf Mulch Diggums) reprise roles that helped attract fans to the first adventure. The author ratchets up the body count in this return engagement (perhaps too steeply for some tastes), and the high-concept premise may be a tad slick for others, but Colfer's finger is firmly on the pulse of his target market, and along with extra helpings of sly humor ("The sprite's breathing calmed, and a healthy green tinge started to return to his cheeks") he delivers a cracking good read. Ages 10-up.