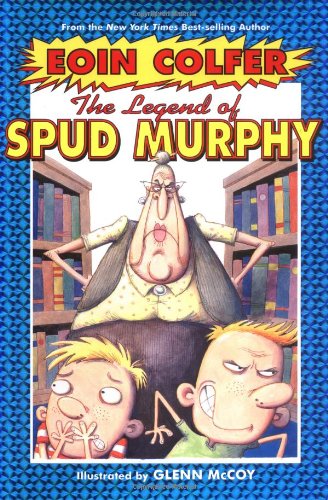 THE LEGEND OF SPUD MURPHY

Colfer ( ) launches a new series with this slender tale of two brothers, nine-year-old Will and 10-year-old Marty. Their mother, determined to find something educational for them to do during the summer, decides the boys should spend afternoons reading at the library. The librarian, Mrs. Murphy, reportedly hates kids and earned the nickname "Spud" because of a gas-powered potato gun she is rumored to hide under her desk with which she shoots noisy youngsters. "That's all I need.... Two more urchins messing up my shelves," grumbles the woman when the brothers arrive. She leads them to the children's section, a single box shelf with four rows of books, and forbids them to leave the patch of worn carpet in front of it. The tug of war between Spud and the siblings yields some humorous results, though the narrative becomes a bit syrupy when the boys, after days of pretending to read, actually get caught up in their books. In the ensuing weeks, "everything was wonderful. We had the time of our lives. Every new book opened the door to a new world." Spud predictably softens when she realizes that the brothers are hooked on books. The story's comic moments, brevity and message are well targeted to reluctant readers, but many middle graders will find this short on substance. Ages 7-up.