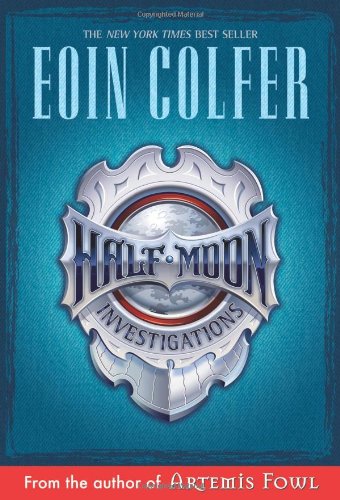 This tale from the author of Artemis Fowl tracks the hilarious exploits of brainiac Fletcher Moon, a mere 12 years old and already a graduate of an online detective course. His first case: über-brat April Devereux, "head of an entire tribe of Barbies," hires him to find out who swiped the lock of a pop star's hair that she bought on eBay. Suspicion centers on Red Sharkey, oldest son of the town's leading crime family. Unraveling the mystery leads Fletcher to break rule No. 1 in his detective's handbook—"Be invisible"—and most of the other rules, too. The large but distinctive supporting cast includes a female school principal whose iron hand is aided by a pair of menacing Dobermans, and Fletcher's older sister, Hazel, who works out her boy troubles by writing plays and poetry while locked in her bedroom. "How about a rhyme for pathetic?" she asks Fletcher, who suggests "prosthetic" (this for Hazel's "epic poem about [his] date with April"). While the setting is suburban and the well-to-do kids have the same fixations as their American cousins, Colfer tailors the details specifically to Ireland. April's cousin May is a step dancer ("Go and do your Riverdance thing," April says dismissively at one point), the boys play hurling ("the Irish sporting version of pitched battle") and swear loyalty by invoking the Irish marble oath, " ." It's a place many readers will very much enjoy visiting. Ages 10-up.