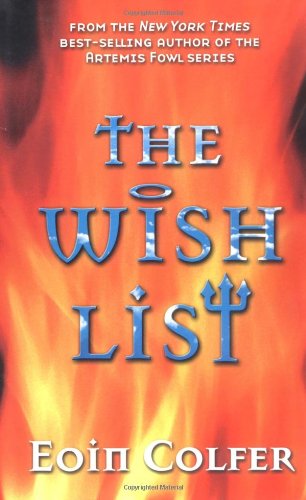 Colfer, author of the Artemis Fowl books, turns his keen wit to the afterlife in this darkly humorous tale. Left in the care of a brutish stepfather after her mother's death, troubled 14-year-old Meg Finn gets more than she bargains for when a break-in at the home of Lowrie McCall, an elderly neighbor, goes horribly wrong and her soul is "knocked clean out of her skin." A last-minute change of heart (Meg keeps her accomplice from killing the old man) earns her the rare distinction of a balanced life account ("dead even")—which means a return trip to earth as a ghost with a chance to redeem herself. Meanwhile, her partner in crime—now an unearthly amalgam of thug and pit bull—is sent back as a "Soul Man" charged with tipping Meg's balance sheet in evil's favor. Fueled by wisecracks, the story is also unexpectedly tender in its delineation of the bond that forms between Meg and Lowrie, whom she joins on his unlikely quest to right his life's wrongs before he dies. With its appealing Irish setting and strong characterizations—including a Gameboy-playing Satan with a, well, devilish sense of humor; his platinum-blonde receptionist ("The Lord of Darkness will see you now"); and a hilariously jaded Beelzebub ("A lawyers' convention bus goes over the edge of the Grand Canyon this afternoon. We're expecting a bit of a glut")—the tale will have readers rooting for plucky Meg, who, in a moving conclusion, winds up altering more fates than just her own. Ages 12-up.