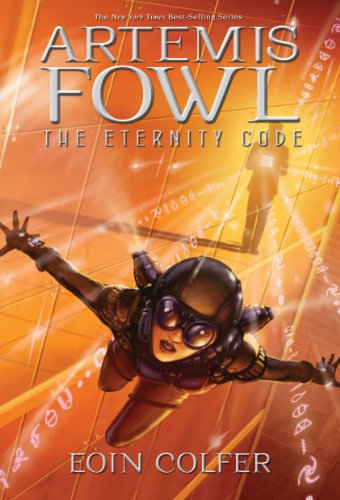 Even better than , this third fantasy thriller starring Artemis Fowl pits the 13-year-old criminal mastermind against his most cunning adversary yet—American billionaire Jon Spiro, owner of the high-tech firm Fission Chips. Artemis Fowl's father, while recuperating from the brush with death he suffered in the last installment, makes a stunning announcement: he wants the family to turn over a new leaf and hew to the straight and narrow. Fortunately for readers, Artemis has other plans. "One last adventure, then the Fowls could be a proper family," he decides. After all, what could go wrong? Everything, as it turns out. Artemis's scheme to extract one metric ton of gold from Spiro, in exchange for keeping the C Cube—a beyond-state-of-the-art computer he's built using pirated fairy technology—off the market, backfires spectacularly. In order to save Butler, his bodyguard, and set things back to rights in the fairy world, Artemis joins forces with Butler's sister Juliet and drafts the help of the usual suspects (elf captain Holly Short, computer-geek centaur Foaly, flatulent dwarf Mulch Diggums). Once again, Colfer serves up a high-intensity plot involving cryogenics and a mobster mentality as the action hurtles toward the climactic break-in at Chicago's Spiro Needle. Agile prose (Jon Spiro is "thin as a javelin" ), rapid-fire dialogue and wise-acre humor ("Goblins. Evolution's little joke. Pick the dumbest creatures on the planet and give them the ability to conjure fire") ensure that readers will burn the midnight oil to the finish. (The ending leaves the door wide open for yet another sequel.) Ages 12-up.