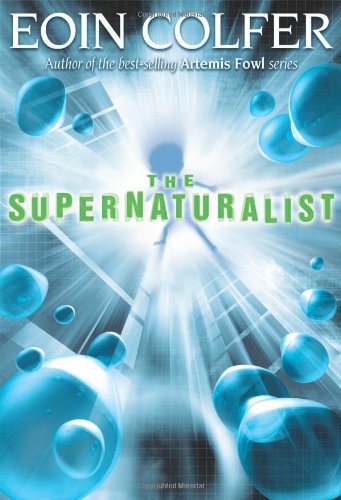 Colfer's hard-luck tale will likely delight fans of his wildly popular Artemis Fowl series with its similar emphasis on high-tech gadgetry and fast-paced action. Set in the near future, the story concerns 14-year-old Cosmo Hill, an orphan living in Satellite City. The metropolis, a dystopia named for the metal Big Brother (a Myishi 9 Satellite) orbiting above it, offers "everything the body wanted, and nothing the soul needed." With no sponsor—a detached figure which has replaced parents—Cosmo ends up in an orphanage where he and other unwanted children become "guinea pigs" for food and drug testing. He escapes the orphanage soon after the novel opens, survives a brush with death and learns that he is a "Spotter" with the rare ability to see Parasites, small blue creatures that allegedly steal energy from wounded humans. Along come the Supernaturalists, a team of vigilantes, all of them also Spotters, who spend their nights roaming the streets and blasting Parasites. The story starts to get interesting late in the game, when the author reveals the true nature of the Parasites and why a mega-corporation with designs on their unique abilities has mounted a misinformation campaign against them. But the journey is uncharacteristically sluggish, especially during a lengthy scene involving rival gangs racing souped-up cars. Ages 10-up.