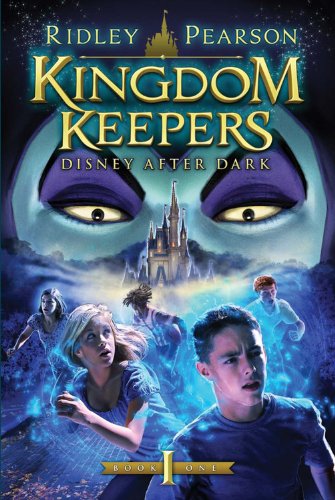 This far-fetched, high-concept story will find an audience despite its fuzzy premise and the creaky workings of its plot. Finn Whitman, 13, is one of five "hologram hosts," middle-school students whose likenesses have been digitally captured so they can appear constantly, guiding visitors around Disney's Magic Kingdom. Finn awakens one night, inside the park, as his hologram self. He's met by Wayne, one of the original "Imagineers," who tells Finn that all five hosts are needed to solve a riddle left by Walt to prevent the villainous "Overtakers" from wreaking havoc inside the gates and throughout the world. Their mission to solve the puzzle, which involves 3-D glasses and trips inside rides such as It's a Small World and Splash Mountain is enough fun that most readers will set aside some nagging questions (e.g., how did Walt, who died five years before the park opened, leave clues inside structures that hadn't been built yet, and why are a bunch of seventh-graders the only ones who can save the place?). The threat rings hollow anyway. Only one "Overtaker" materializes—Maleficent, the witch from Disney's . Finn is the sole fleshed-out character (the two girl hosts are given little to do and seem indistinguishable), and some passages read like an ad (as when Wayne catologues the Disney empire: "the Disney parks, the cruise line, the Broadway shows, the Web sites, Disney on Ice"). Still, with Finn and friends traversing tunnels and battling the creepy Audio-Animatronic characters, readers will likely line up for this ride. Ages 10-up.