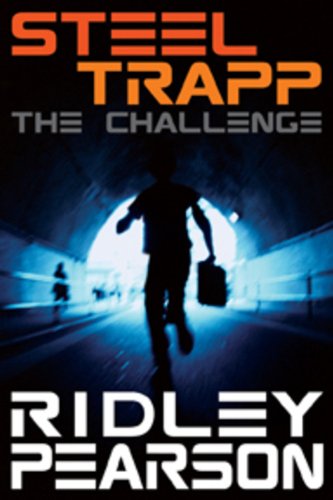 Steve Trapp, nicknamed “Steel” for his photographic memory, is leaving Chicago for a science competition in Washington, D.C., when he sees a passenger detrain without her briefcase. The attempt to return it ensnares Steel in a scheme to rig the lottery on behalf of a terrorist group, and gets him tailed by Roland Larson, the U.S. marshal from Pearson's adult novel . Pearson's smooth writing isn't enough to paper over the many illogical elements in his plot. Why do the Trapps take their large dog on a two-day train trip for a three-day weekend? Why has the boy genius, Steel, not figured out by age 14 that his father isn't a salesman? Moreover, the event that triggers Steel's involvement just isn't convincing: by looking through a tiny hole in the bottom of the briefcase, he spies a Polaroid of a woman gagged and tied to a chair; later, he is able to find the building where she's being held by matching its windows to the background in the photo. Pearson mentions some intriguing science (for example, the use of cell phones and microchip technology to make balloons fly) and the adventure has its moments, but his mystery gets derailed by a plague of MacGuffins. Ages 10-up.