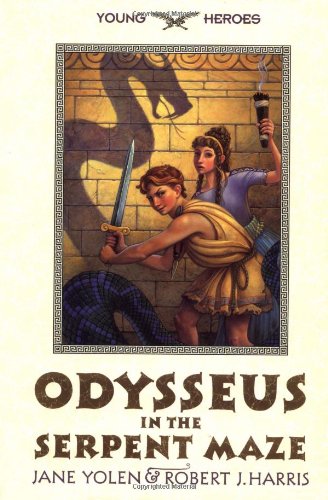 ODYSSEUS IN THE SERPENT MAZE

The team behind last year's launches the Young Heroes series with a rollicking adventure starring a 13-year-old Odysseus, prince of Ithaca, who meets his match (and future wife) in Spartan captive Penelope. Drawing on the, the and "what archeologists have told us about the [Greek] civilization," Yolen and Harris imagine the youth's formative quest. No previous knowledge of ancient Greece is necessary, and readers may well be entertained by the fast-paced and sometimes slapstick antics of crafty Odysseus (who develops a crease between his eyebrows when he's "about to come up with an outlandish excuse—lie, fib, wile—for doing something he'd already decided to do") and his cautious friend, Mentor. Together they do battle with pirates and inadvertently rescue Penelope and her cousin Helen of Troy; form an alliance with Silenus, the amorous satyr; and organize a perilous rescue mission against Ladon, the serpent with 100 heads in Crete's infamous labyrinth. The authors weave in legends, such as Siren and Daedalus, as well as surprising tidbits (e.g., the Greek nobility's illiteracy). The new spin here is that Penelope accompanies Odysseus on his adventures, often acting more heroic than he; by giving this champion a worthy heroine who complements his strengths and even compensates for his weaknesses, the authors may well draw boys and girls in equal numbers—and send them clamoring for more Greek myths. Ages 8-12.