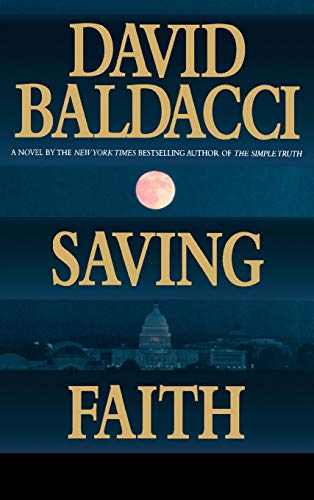 Baldacci's fifth high-concept premise in as many novels (The Simple Truth; Absolute Power; etc.) propels his hard-working new thriller: a renegade CIA faction attempts to reassert the agency's primacy over the FBI by manipulating members of Congress who fund both outfits. To do so, the CIA conspirators aim to take over a bribery scheme they've discovered. The scam was concocted by legendary lobbyist Danny Buchanan, who has been greasing the palms of lawmakers to gain their support of bills aiding the poor and hungry overseas. The spooks plan to assassinate Buchanan and his prot g , the lovely Faith Lockhart, and force the legislators, under threat of exposure, to support the CIA over the FBI. First, however, they'll have to kill the FBI person guarding Faith, for she has confessed everything to the bureau in hopes of working a deal for herself and Buchanan. But the CIA villains haven't reckoned on the resilience of the two lobbyists, nor on the grit of FBI agent Brooke Reynolds, nor on the skill of PI Lee Adams, who gets caught up in the attempted hit on Faith and her guardian-- and who then goes on the run with the lobbyist. The novel evolves into a frantic, exciting chase, FBI after CIA after Lee/Faith, with a few nifty twists. Baldacci's characters continue to grow in complexity--there's an exceptionally fine scene in which Lee, drunk, nearly rapes Faith--but, alas, so does his plotting. This novel is overdone, with too many heroes and subplots and enough data withheld from readers to generate confusion. Baldacci's prose can still break the jaws of subvocalizers, too. The novel moves fast, though, and its players and suspense are strong--as should be sales. Main selection of the Literary Guild and Doubleday Book Club; simultaneous audiobook. (Nov.)
close
Details