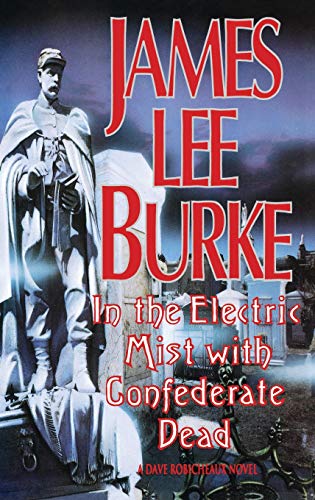 In the Electric Mist with the Confederate Dead

In the sixth Dave Robicheaux mystery (following A Stained White Radiance ), Burke explores new narrative territory with qualified success, leading his Cajun detective into a series of dreamlike encounters with a troop of Confederate soldiers under Gen. John Bell Hood. Soon after the severely mutilated body of a young woman is found in a ditch outside the southern Louisiana town of New Iberia, deputy sheriff Robicheaux busts Elrod Sykes, star of a Hollywood movie being filmed nearby, for drunk driving. Sykes says a skeleton wrapped in chains was unearthed during filming in a marsh where, in 1957, Robicheaux witnessed--but remained silent about--the killing of a chained black man by two white men. As the belatedly guilt-stricken detective tries to identify that victim, another young woman is brutally killed. Then, Sykes's co-star is shot to death, perhaps having been mistaken for Robicheaux, who gradually connects the recent murders to Louisiana mob-kingpin Baby Feet Balboni, a key backer of the movie. With the help of FBI agent Rosie Gomez and the intermittent, often elliptical advice of the ghostly Gen. Hood, Robicheaux nails the psycho--but not before the man has kidnapped the detective's young daughter Alafair. Burke's evocative prose is well suited to the misty bayou scenes in which past and present mingle, but the links between the two eras are weak, and some of the contemporary characters lack definition. 75,000 first printing; BOMC and QPB selections; author tour. (Apr.)
close
Details