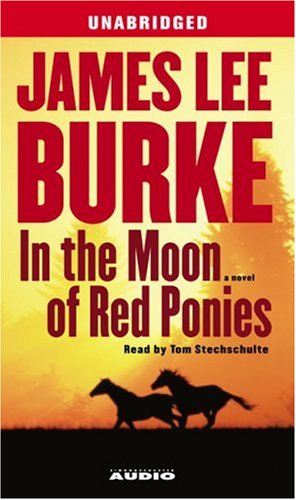 IN THE MOON OF RED PONIES

Narrator Stechschulte does an excellent job giving voice to the many eccentric characters in Burke's fourth novel starring former Texas Ranger Billy Bob Holland, last heard from in (2001). Billy Bob and his private investigator wife, Temple, have relocated to a ranch in Missoula, Mont. Not long after he hangs his attorney's shingle, Billy Bob receives a visit from ex-biker/rodeo clown Wyatt Dixon, who he helped send to jail for life in . Wyatt, free on a technicality, once buried Temple alive before spending time in federal prison. Now a born again Christian, he wants Holland to represent his horse-trading business. Here Stechschulte's talent truly shines. His portrayal of Wyatt's vacuous politeness is unnerving. Billy Bob doesn't trust him, nor does the listener. But should we? This is just the tip of a complicated ecoterrorist plot chock full of multifaceted characters, including an ex-mercenary police detective, a Native American Desert Storm hero/activist and a shady U.S. senator. Stechschulte penetrates the psyche of each of these players with incredible acuity, making this an excellent summer listen.