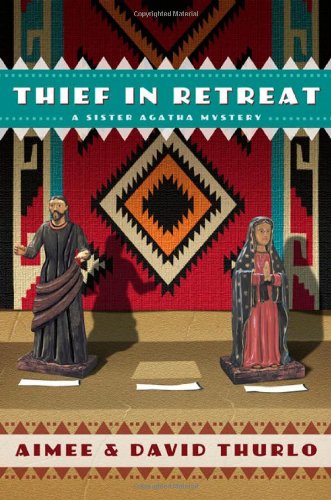 Extern nun Sister Agatha looks into some odd doings at the Retreat, an upscale New Mexico resort that was once the Monastery of Saint John in the Pines, in her divine second outing from the prolific Thurlos (after 2002's ). The disappearance and reappearance of a number of religious statues and artwork that were allowed to remain at the Retreat after the sale of the old monastery prompt Archbishop Miera to call in the curator of the local college's museum. Enter Sister Agatha, her Harley and Pax, her white German shepherd. Sister Agatha and the curator join forces with Sheriff Tom Green, a close friend from the sister's previous life, who's out of his own jurisdiction but on hand to aid in the growing investigation. Suspects that include the local sheriff and an assemblage of mystery writers, plus a resident ghost that haunts the Retreat's halls and even has Sister Agatha wondering about unrest in the afterlife, keep this cozy humming. Readers will cheer as Sister Agatha puts God first and follows His lead.