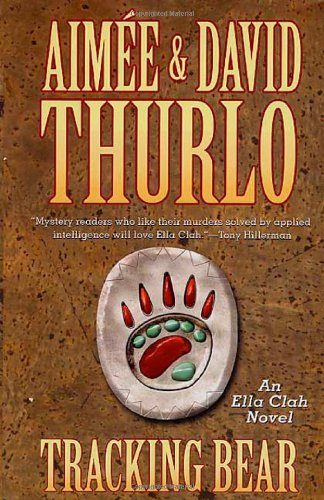 The suspense never lets up in the Thurlos' eighth mystery to feature Navajo Special Investigator Ella Clah (after 2002's ), which opens with the murder of a police officer whose backup call is unanswered because of the defective equipment of the pathetically underfunded Tribal Police. Funding issues for the department and the tribe as a whole have the community divided about allowing uranium mining on the reservation. While one group touts the positive financial benefits, opposing forces remind the tribe of earlier mining efforts that poisoned their people and their land. As vandalism, threats and more dead bodies pile up, Ella works frantically to find the source of the crime spree. When she learns that the dead officer's father once worked with the highly classified government experiments at Los Alamos, the fog begins to clear and the stakes become terrifyingly high. The Thurlos weave in a lot of personal background, insights and conflicts for both Ella and her family. Adding further tension is Ella's commanding officer's insistence that her team complete a training course headed by an Anglo woman who seems willing to stop at nothing to make Ella look bad. Toss in Ella's traditionalist mother and brother, sinister skinwalkers and a handful of political bribe-takers, and you have another surefire winner in a durable series.