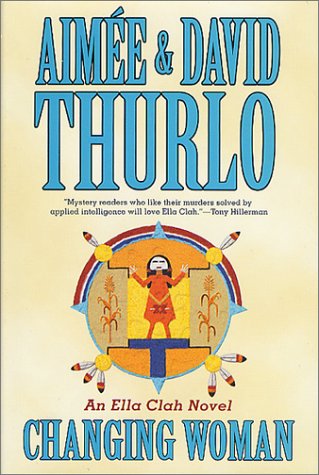 The authors' seventh satisfying novel (after 2001's ) about Navajo Police Special Investigator Ella Clah finds her Native American community wracked by internal divisions as well as besieged and bedeviled by deadly outside forces. On the Rez, the issue of gaming—using casino money as a means of solving or alleviating financial woes—has serious adherents on either side. But a nebulous pro-gaming faction is resorting to pressure tactics and may be behind a rash of vandalism ranging from merely annoying to life threatening. The unsolved acts of vandalism are undermining the Navajo Tribal Police, and as the severity of the acts increases to the level of terrorism, not only Ella but her family are under attack. To add to her troubles, an escaped prisoner with a grudge is gunning for her. In spite of its thriller-like plot, the authors manage to present a good look at the complexities of the gaming issue while maintaining the character-driven essence of the series. Changing Woman—the creative feminine power at the center of Navajo beliefs—is seen in three generations of Ella's family. Ella's mother, Rose, a traditionalist, begins to assert herself in tribal affairs in a fashion that Ella has never seen before. And her young daughter, Dawn, begins to manifest her nature in new ways. But it is Ella, balanced between mother and daughter, modernist and traditionalist, job and family, who remains the captivating focal point of this excellent series.