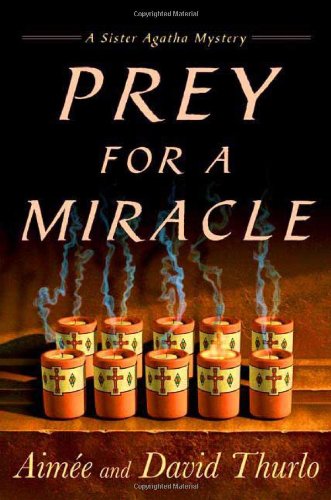 Prey for a Miracle: A Sister Agatha Mystery

In the Thurlos' charming but imperfect third cozy involving New Mexico's Our Lady of Hope Monastery (after 2004's ), Sister Agatha is charged with looking after Natalie, an eight-year-old whose mother lies in a coma after a bad car wreck. Sister Agatha and her buddy, Sheriff Tom Green, suspect that the wreck was no accident—someone is after Natalie and her mom. If protecting a precocious little girl isn't enough to manage, Sister Agatha is also burdened by her convent's financial problems. The order is short on cash and needs to replace the roof, a subplot actually more engaging than the somewhat thin mystery surrounding Natalie and her mom's stalker. Indeed, the Thurlos could have provided a more plausible lineup of suspects and a less predictable ending. Still, Sister Agatha, with her winsome ways and no-nonsense faith, is sure to delight readers.