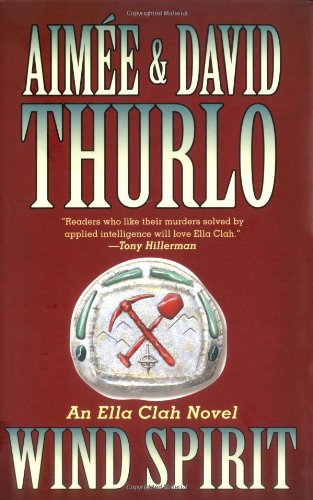 After last year's blandly botanical , the Thurlos make a refreshing return to an honest-to-goodness whodunit, in which Ella Clah, special investigator for the Navajo Tribal Police, undergoes such trauma that she's forced to rethink her priorities—and her entire life. When tribal councilman Lewis Hunt's invalid wife is burned to death in a suspicious house fire, Clah and her police team set out to prove arson and bring a killer to justice. But the solution turns out to be anything but simple. Local radio talk-show host George Branch has stirred up a hornet's nest regarding gun control and Hunt's stand for heavier restrictions. Branch soon finds himself a suspect in the fire investigation as well as the target of another misguided attempt to express someone's difference of opinion. And there's family trouble, too. Ella's medicine man brother, Clifford, tries to locate an elderly holy man who can perform the proper curing ceremony to alleviate the traditionalists' fears of Ella and her perceived "sickness," but meanwhile Clifford's busyness sends his wife Loretta to find more than just employment at the local college. There are no slow spots in the action as Clah dodges bullets, heads up a hostage rescue and battles her personal and job-related demons. Fans will delve into this one and feel right at home.