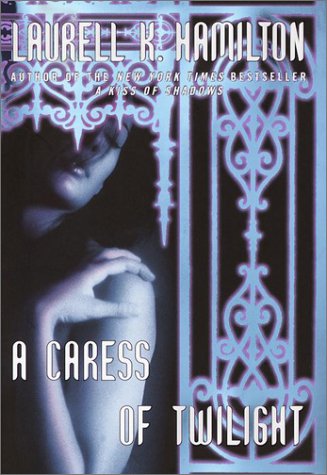 A CARESS OF TWILIGHT

In the second R-rated outing (after 2000's ) from bestseller Hamilton to feature bright and winsome faery princess Meredith Gentry, the unlikely shamus, who runs an L.A. detective agency with a staff of faery musclemen (plus a pet goblin), seems to spend almost as much time pondering her position in the fey world as attending to her client, glamorous film star Maeve Reed, actually a Seelie goddess, who needs Meredith's help in getting pregnant. Meredith does what she can for Maeve, although she has troubles enough of her own in the conception game. As one of two possible heirs to the Unseelie throne, the other being her nasty cousin, Prince Cel, Meredith must produce her own child and then, by faery tradition, marry her partner. It isn't easy, since any father must be kingly material, but our heroine is a game lass, and her failure is not for lack of trying. In an exciting climax, the LAPD Bureau of Human and Fey Affairs summons Meredith to battle a fearsome, crawling, tentacled and slobbering monster, the Nameless, which was too blithely created by opposing faery courts—her own, the Unseelie, ruled by her millennium-old aunt, Queen Andais, and the Seelie, ruled by the ruthless and equally ancient King Taranis. More attention to the detective motif might have made the story more fun, but steamy prose and Meredith's obsessive personal conflicts should keep the faithful turning the pages. (