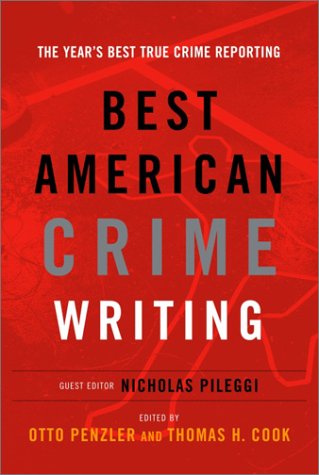 Penzler, founder of the Mysterious Press and Otto Penzler Books, and true-crime writer Cook (), inaugurate a new annual series with this first-rate collection of the best crime writing published in 2001. William Langewiesche delivers both the human and the technical events in "The Crash of EgyptAir 990"; Alex Prud'homme investigates the dilemma facing the state of Texas, which condemned Johnny Paul Penry, a retarded man, to death in its busy execution chamber; Julian Rubinstein portrays Jacob "Cookie" Organ, an Israeli who was "the Pablo Escobar of Ecstasy"; while Nancy Gibbs conjures a frightening September 11 play-by-play in "The Day of the Attack." The majority of the pieces have a finger on the cultural pulse, but the best offer something more. Robert Draper's portrayal of a troubled girl who eventually kills her two children includes a scathing criticism of society at large ("Strangely, the Texas authorities insist upon viewing Tina Marie's dirty-laundry list of boyfriends as the handiwork of a manipulative black widow.... The s fly"). E. Jean Carroll's "The Cheerleaders" is a morose and darkly ironic account of suicide, torture and murder in a town rumored to have been the model for Bedford Falls in . Charles Bowden immerses readers in the muddled and too familiar world of a DEA agent slipping across the line in Mexico. This is an important book for crime buffs, but will appeal to general readers as well. The only complaint—and it's minor—is that, though the editors say they scoured "nearly two hundred so-called little magazines, reviews and journals," most of these articles come from such national magazines as the , and the