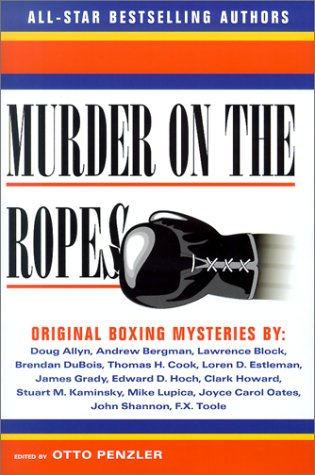 MURDER ON THE ROPES: Boxing Mysteries

As shown in this heavyweight anthology, boxing and crime go together like beer and nuts. Leading mystery guru Penzler has put together an all-star roster of 14 short stories that include a number of rich character studies and only a couple of traditional whodunits. More than a few turn on a boxer's throwing (or not throwing) a fight. Perhaps the most impressive effort in this line is Joyce Carol Oates's "The Man Who Fought Roland LaStarza," in which a woman tries to fathom why a close friend of her father's committed suicide after drawing a big fight back in the '50s. Also notable for their buildups to climactic bouts are Doug Allyn's "Sunlight Shining on Water" and Clark Howard's "The Trial Horse." More conventional entries feature some series characters: Stuart M. Kaminsky's Toby Peters in "Long Odds," in which Peters protects the real-life Archie Moore; John Shannon's Jack Liffey in "The Problem of Leon," about a macho boxing father in conflict with his sensitive runaway son; and Andrew Bergman's Jack LeVine in "In the Tank," a glib, grim portrait of murder, racism and injustice in 1952 America. Edward D. Hoch spins a neat if unlikely tale of jealousy and revenge in "The Man Who Boxed Forever," while Mike Lupica deals poignantly with memory loss in "Dream Street." A wife takes revenge on her dead husband's trainer in Lawrence Block's slight "You Don't Even Feel It," while a boxer pays the full price for not revealing he's gone blind in one eye in F.X. Toole's darkly compelling "Midnight Emissions." Not for the fainthearted, these gritty tales of the ring pack a powerful punch.