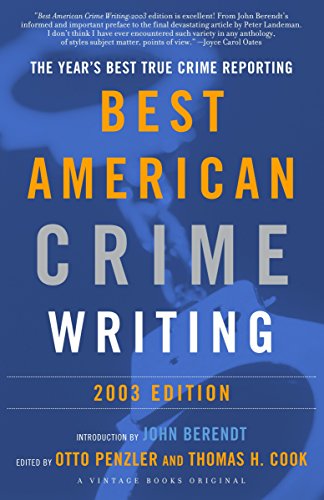 Surpassing even last year's acclaimed inaugural collection, Penzler and Cook, with guest editor Berendt (), return with another candid and powerful selection of true crime reporting. The editors have pulled together an array of essays distinguished as much by their insight and intelligence as by their riveting tales of bizarre and unnerving criminality. Articles such as "The Accused" by Paige Williams (which exposes the legacy of suspicion that has haunted a wrongfully accused man since 1978) and "The Terrible Boy" (Tom Junod's brilliant and compassionate portrait of an unlucky kid who swung a fateful punch and became a poster child for antibullying movements across the nation) transcend the genre to explore the disregarded costs of justice and lives destroyed in moments of thoughtlessness. Some of the essays confront depraved atrocities, but others are only marginally associated with crime. "A Woman's Work" by Peter Landesman recounts how Pauline Nyiramasuhuko, the former national minister of family and women's affairs for Rwanda, masterminded the rape and slaughter of thousands. While "The Boy Who Loved Transit" by Jeff Tietz tells the story of a harmless, lovable man with Asperger's syndrome whose obsession with trains leads him to repeatedly impersonate a New York City Transit Authority employee. This excellent collection covers Web-cam pornography, the Enron debacle, forced prostitution in Europe, killer attack dogs, the murder of reporter Daniel Pearl, bumbling Nazi saboteurs and the science of rotting corpses—so there is sure to be something here for everyone.