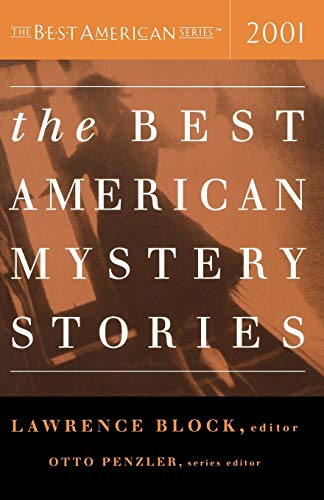 Did you hear the story about the guy who shows up at his brother's house after a long absence with a van full of old wedding dresses? It's called "Family," was written by San Francisco-based Dan Leone, appeared originally in a magazine called , and is one of the 20 unusually excellent tales of crime and mystery published in 2000 and collected by the hard-working series editor Otto Penzler and MWA Grand Master Block for this fifth annual celebration of the form. Like one of those taster menus of small but wonderful items served at top restaurants, this is a rich and satisfying collation. Although every story is well worth reading, particularly dazzling are "Lobster Night," by Russell Banks, whose first line –"Stacy didn't mean to tell Noonan that when she was seventeen she was struck by lightning"—deserves an award of its own; William Gay's "The Paperhanger," a Hitchcock movie waiting for the Master to return to make it; and "Her Hollywood" by Michael Hyde, which just about slides in under the wire of Block's dictum that "a crime or the threat of a crime is a central element" but is a chilling exercise in any genre. More traditional, but no less satisfying, are cop stories ("Erie's Last Day," by Steve Hockensmith, and "Under Suspicion," by Clark Howard); a private eye outing (Jeremiah Healy's "A Book of Kells"); and even an FBI effort (T. Jefferson Parker's "Easy Street"). A most impressive compilation—especially given that, as Block notes in his introduction, two thirds of those selected were writers whose names were new to him.