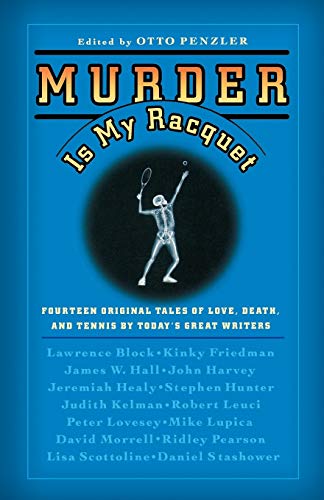 MURDER IS MY RACQUET

Mystery maven Penzler's latest all-original sports anthology offers 14 mostly high-quality tales of the underside of lawn tennis, the traditional game of sometimes not so gentle men (and women). There's something to suit every taste, from the short and light (Daniel Stashower's "A Peach of a Shot" and Kinky Friedman's "Tennis, Anyone?") to grittier psychological stories (John Harvey's "Promise" and Robert Leuci's "A Killer Overhead"). In Lisa Scottoline's amusing "Love Match," the tennis-playing protagonist is just plain lucky to be in the right place at the right time. Set in the South in 1948, Stephen Hunter's gripping "Stephen Longacre's Greatest Match" provides a lesson in race relations when a young white man, a ne'er-do-well from a wealthy family, tries to redeem himself by taking on a poor black man as his doubles partner. Notable chiefly for its closing pun is David Morrell's "Continental Grip," about the baffling murder of a Sante Fe, N.Mex., tennis pro. Other top-rank contributors include Lawrence Block, James W. Hall, Peter Lovesey and Judith Kelman. This tome is the perfect companion to have in the bag for those rain delays at Wimbledon.