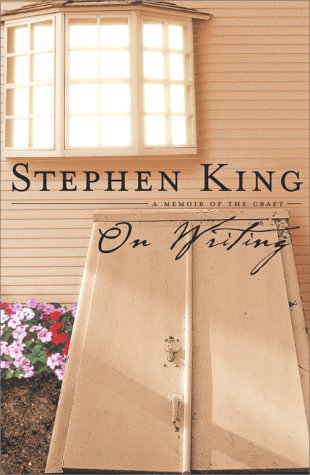 On Writing: A Memoir of the Craft

""No one ever asks [popular novelists] about the language,"" Amy Tan once opined to King. Here's the uber-popular novelist's response to that unasked question a three-part book whose parts don't hang together much better than those of the Frankenstein monster, but which, like the monster, exerts a potent fascination and embodies important lessons and truths. The book divides into memoir, writing class, memoir. Many readers will turn immediately to the final part, which deals with King's accident last year and its aftermath. This material is tightly controlled, as good and as true as anything King has written, an astonishing blend of anger, awe and black humor. Of Bryan Smith (who drove the van that crushed King) watching the horribly wounded writer, King writes, ""Like his face, his voice is cheery, only mildly interested. He could be watching all this on TV...."" King's fight for life, and then for the writing life, rivets attention and inflames admiration as does the love he expresses throughout for his wife, novelist Tabitha. The earlier section of memoir, which covers in episodic fashion the formation of King the Writer, is equally absorbing. Of particular note are a youthful encounter with a babysitter that armchair psychologists will seize upon to explain King's penchant for horror, and King's experiences as a sports reporter for the Lisbon, Maine, Weekly Express, where he learned and here passes on critical advice about writing tight. King's writing class 101, which occupies the chewy center of the book, provides valuable advice to novice scribesDalthough other than King's voice, idiosyncratic and flush with authority, much of what's here can be found in scores of other writing manuals. What's notable is what isn't here: King's express aim is to avoid ""bullshit,"" and he manages to pare what the aspiring writer needs to know from idea to execution to sale to a few simple considerations and rules. For illustration, he draws upon his own work and that of others to show what's good prose and what's not, naming names (good dialogue: Elmore Leonard; bad dialogue: John Katzenbach). He offers some exercises as well. The real importance of this congenial, ramshackle book, however, lies neither in its autobiography nor in its pedagogy, but in its triumphant vindication of the popular writer, including the genre author, as a writer. King refuses to draw, and makes a strong case for the abolition of, the usual critical lines between Carver and Chandler, Greene and Grisham, DeLillo and Dickens. Given the intelligence and common sense of his approach, perhaps his books' many readers will join him in that refusal. 500,000 first printing. (Oct.)
close
Details