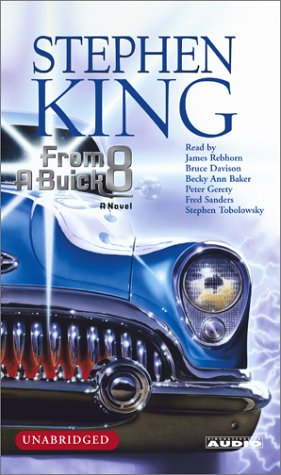 An assembly of readers performs King's latest, which is told from several different perspectives. This subdued, vaguely creepy tale is about an extraordinary force that infiltrates the lives of the people who work at a police barracks in rural Pennsylvania. King displays his masterful knack for building tension, but this work is more about the effect of events on the central characters' psyches than it is about the events themselves. In that vein, the portrayals of the characters, their inner monologues and their interactions are vital to the success of this audio, and the entire cast does a fine job. Rebhorn serves as an able narrator and provides a brief, chilling portrait of the sallow, mysterious man who brings an otherworldly '54 Buick into the life of Troop D before vanishing. Davidson handles the inner turmoil of Sgt. Sandy Dearborn and the youthful stubbornness of troubled Ned Wilcox. Among the other highlights is Tobolowsky's perfectly inflected Swedish accent for Arky, the troop's janitor. With only a few, appropriately wistful notes of guitar at the beginning and end, the production is kept to a minimum. The approach works well for a quieter book that relies less on shock than much of King's previous work.