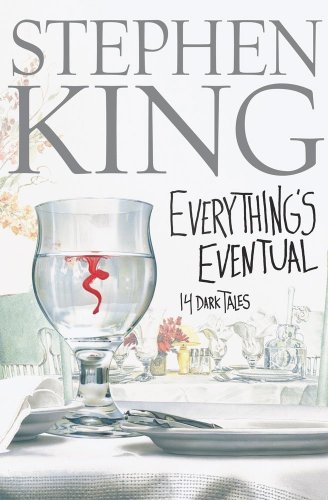 Eyebrows arched in literary circles when, in 1995, the published Stephen King's "The Man in the Black Suit," a scorchingly atmospheric tale of a boy's encounter with the Devil in backwoods Maine. The story went on to win the 1996 O. Henry Award for Best Short Story, confirming what King fans have known for years—that the author is not only immensely popular but immensely talented, a modern-day counterpart to Twain, Hawthorne, Dickens.

"The Man in the Black Suit" appears in this hefty collection, King's first since Nightmares and Dreamscapes (1993), along with three other extraordinary tales: "All That You Love Will Be Carried Away," an intensely moving story of a suicidal traveling salesman who collects graffiti; "The Feeling, You Can Only Say What It Is in French," about a woman caught in a fatal loop of déjà vu; and "The Death of Jack Hamilton," a gritty, witty tale of Dillinger's gang on the lam. Together, they make up what King, in one of many author asides, calls his "literary stories," which he contrasts to the "all-out screamers"—though most of the stories here seem a mix of the two, with the distinction as real as a line on a map. "Autopsy Room Four," a black-humor horror about a man who wakes up paralyzed in a morgue and about to be autopsied, displays a mastery of craft, and "1408," a haunted hotel-room story that first surfaced on the audio book , engenders a sense of profound unease, of dread, as surely as do the elegant work of Blackwood or Machen or, if one prefers, Baudelaire or Sartre. King's talent doesn't always burn at peak, of course, and there are lesser tales here, too, but none that most writers wouldn't be proud to claim, like the slight but affecting "Luckey," about a poor cleaning woman given a "luckey" coin as a tip, or "L.T.'s Theory of Pets," which King cites as his favorite of the collection, but whose shift from humor to horror comes off as arbitrary, at least on the page (the story first appeared in audiobook form).

Then there's "Riding the Bullet," the novella that put King on the cover of and rattled the publishing community not for its content—a suspenseful encounter with the dead—but for its mode of delivery, as an e-book, and "The Little Sisters of Eleuria," another resonant entry in King's self-proclaimed "magnus opus" about Roland the Gunslinger (Roland will return, King lets on, in a now-finished 900-page Dark Tower novel, ). Fourteen stories, most of them gems, featuring an array of literary approaches, plus an opinionated intro from King about the "(Almost) Lost Art" of the short story: this will be the biggest selling story collection of the year, and why not? No one does it better.