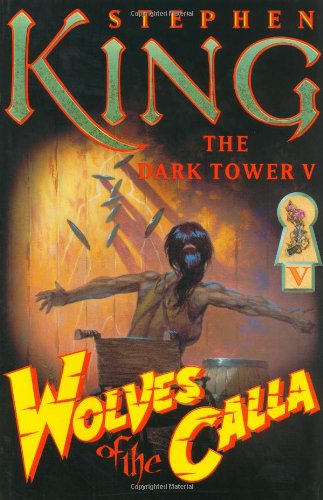 THE DARK TOWER V: Wolves of the Calla

"Time is a face on the water," stretching and contorting reality as gunslingers Roland, Eddie, Susannah, Jake and their talking pet "billy-bumbler" Oy continue their quest to prevent the destruction of the Dark Tower and, consequently, save all worlds from Chaos and the Crimson King's evil, red-eyed glare. Roland—the primary hero of King's epic tale, the first volume of which appeared in 1982—and company momentarily fall off the "Path of The Beam" to help the residents of Calla Bryn Sturgis, a farm town. But as Dark Tower fans know, everything follows The Beam, so what looks like a detour may really serve the will of "ka" (destiny). Roland and his posse learn that every 20-odd years the "Wolves" kidnap one child from each set of the Calla's twins, bring them to the Tower and, weeks later, send them back mentally and physically impaired.

Meanwhile, back in 1977 New York City (the alternate world of Roland's surrogate son, Jake), bookstore owner Calvin Tower is being threatened by a group of thugs (readers will recognize them from , 1987) to sell them a vacant lot in midtown Manhattan. In the lot stands a rose, or rather Rose, which is our world's manifestation of the Dark Tower. With the help of the Old Fella (also known to readers as Father Callahan), the gunslingers must devise a plan against evil in both worlds. The task, however, is further complicated as Roland and his gang start noticing behavioral changes in wheelchair-bound, recovered schizophrenic Susannah.

As the players near the Tower, readers will keep finding exciting ties between the Dark Tower universe and King's other books, with links to , , , , and . The high suspense and extensive character development here (especially concerning Jake's coming-of-age), plus the enormity of King's ever-expanding universe, will surely keep his "Constant Readers" in awe.

Wizard and Glass The Gunslinger Stephen King's The Dark Tower: A Concordance, Volume I, .