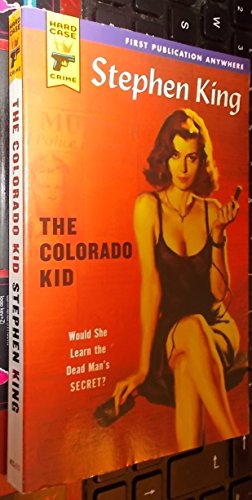 The Hard Case Crime series is a wonderful idea: a mix of original and reprinted hard-boiled detective novels by some of the best writers in the field, packaged to look like lurid 1940s and 1950s thrillers. And getting Stephen King to write a new novel as part of the series was quite a coup. King is the author of record when it comes to fiction set in America in recent decades, and here he is with a noir detective story. Alas, what he actually turned in was a cozy, a sort of Jan Karon take on the hard-boiled genre. And at the end, it turns out to be rather arty — if by "arty" you mean "doesn't answer any important questions."

Fresh out of journalism school, Stephanie McCann is an intern at a weekly newspaper in an obscure corner off the coast of Maine. She is writing homey features and reporting on trivial stories, but she rather enjoys it. Then a big-city reporter comes to town to gather stories about "unsolved mysteries." The paper's owner and the managing editor send him away unsatisfied, and then tell Stephanie the only real unsolved mystery on the island.

The banter between the two old men provides all kinds of local color, but it also means the pace of the storytelling is glacial. It takes most of chapter one to explain why they filch the cash the big-city reporter left to pay for a meal. We're in chapter five before they start telling the story that gives the book its title. Years earlier, two high school sweethearts found a dead body on the beach. There was no identification, and only a few items found with the body gave any hope of telling where he was from. It isn't until too many chapters later, after much meandering, that the old men tell Stephanie (and us) how they found out the man was from Colorado, which led to the identification of the body.

By the end we have learned little more than this: the man may or may not have been murdered; he could only just barely have made it to Maine from Colorado in time to die on that beach; and he had no known reason to make such a frantic trip in the first place. Nor do we actually care, since none of the characters do. They're only telling the story in order to explain that it's not a story at all— a conclusion with which readers will heartily agree. The real mystery: why would the editors publish a story that will only frustrate anyone looking for the kind of hard-boiled detective novel they're promised on the cover? Stephen King is a very good writer, so even when telling a nonstory at elaborate length he is quite readable. I would have enjoyed this piece in a magazine. It's the misleading presentation that will rankle.