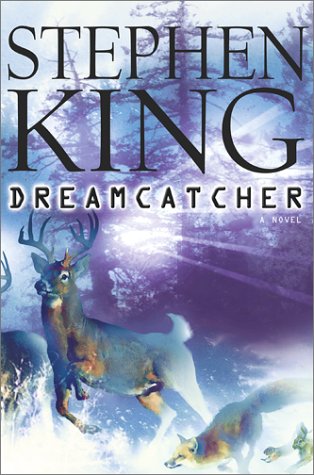 In an author's note to this novel, the first he's written since his near-fatal accident, King allows that he wrote the first draft of the book by hand. So much for the theory that it's word-processing alone that leads to logorrhea. Yet despite its excessive length, the novel one of the most complex thematically and structurally in King's vast output dazzles and grips, if fitfully. In its suspenseful depiction of an alien invasion, it superficially harkens back to King's early work (e.g., the 1980 novella ""The Mist""), but it also features the psychological penetration, word-magic and ripe imagination of his recent stuff (particularly Bag of Bones). The action shuttles between present and past, following primarily the tribulations of a band of five males four regular guys from Derry, Maine (setting of King's It and Insomnia), and their special friend, Duddits, a Down's child (then man) with telepathic abilities. The first chunk of the text offers a tour de force of terror bound in darkest humor, depicting the arrival at the four guys' remote hunting cabin of a man who's fatally ill because he harbors in his bowels an alien invader. Yet the ferocious needle-toothed ""shit-weasel"" that escapes from him is only one of three varieties of invader the protagonists, and eventually a black-ops containment force, face: the others are Grays, classic humanoid aliens, and byrus, a parasitical growth that threatens to overtake life on Earth. The presence of the aliens makes humans telepathic, which leads to various inspired plot complications, but also to an occasional, perhaps necessary, vagueness of narration is there anything more difficult to dramatize than mind-to-mind communication? Numerous flashbacks reveal the roots of the connections among the four guys (one of whom is hit by a car and nearly dies), Duddits and even the aliens, while the last part of the book details a race/chase to save the world a chase that goes on and on and that's further marred by the cartoonlike presence of the head of the black ops force, who's as close to a caricature as King has strayed in several novels. The book has flaws, then, and each of them cries ""runaway author."" Is anyone editing King these days? But, then, who edited, say, Mahler at his most excessive? The genius shines through in any case, in the images and conceits that blind with brilliance, in the magnificent architecture, in the wide swaths of flat-out riveting reading and, most of all, in the wellsprings of emotions King taps as he plumbs the ties that bind his characters and, by extension, all of us to one another. (One-day laydown, Mar. 20) Forecast: As King's first book-length fiction since the accident, this novel originally titled Cancer will generate particular interest commercially and critically. It may be nominated for awards; it certainly will top the charts. Film rights optioned by Castle Rock.
close
Details