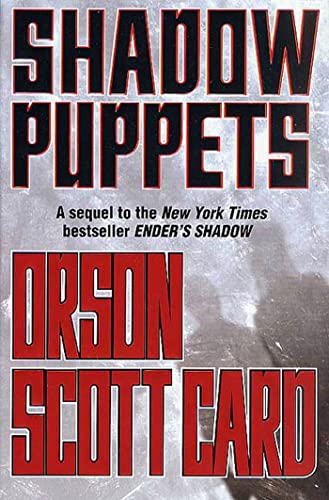 Fans of Card's bestselling Ender series will be delighted with this tale of teen empowerment (following 2001's ), as the Battle School brats cope with life after the war with the Formics. Peter Wiggins, now leader of the worldwide Earth government, the Hegemon, makes a tactical error when he authorizes the rescue of his archenemy, Achilles, from the Chinese, only to discover Achilles, dangerously insane, is a Trojan Horse. Peter, along with his parents, must flee the planet temporarily, only to discover plots within plots at the site of the now dismantled Battle School. Meanwhile, Bean, accompanied by his wife, Petra, comes to terms with his body: he won't stop growing, and he's doomed to a short life. He and Petra seek out the man who manipulated his genes in order to have him create children without the same problem, only to have the embryos stolen. Bean and Petra race against time to try to rescue their unborn children while keeping Peter apprised of world events. Into this mix, Card tosses in a war, Chinese expansionism, unrest in India and a dangerously unfettered Achilles. The political becomes the personal in a final showdown between Bean and Achilles. These teens play for keeps: the world is their stage, with Battle School grads in key positions of power in China, the Muslim world and India, all ready to work together to create world peace. Card discusses important topics here—the nature of the parent-child relationship; the roles of love and service—that are implicitly part of coming of age. (