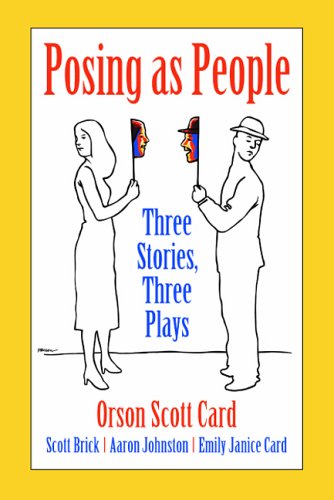 As these three Orson Scott Card SF stories and their one-act play adaptations show, a good human drama can happen anywhere in time and space. As they explain in their respective commentaries, Brick, Johnston and Emily Janice Card each had a longstanding fondness for the story he or she adapted. "Clap Hands and Sing," about an old man time-traveling to consummate a relationship he never had, is the least moving of the three in both forms, largely because the protagonist is a selfish jerk. "Lifeloop" poses the question: if your life is a TV show, how will you know if true love comes your way? "Sepulcher of Songs" follows a young quadruple amputee's escape from either her body or her mind as aided by a possibly imaginary friend and chronicled by the psychiatrist who comes to love her. Each covers the dual themes of troubled love and being someone other than who you are. By the marvelous rendering of these stories as plays, their essences have been distilled, concentrated and made more immediate.