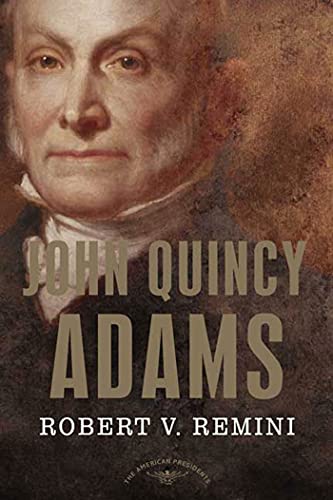 John and Abigail Adams's son was arguably the most brilliant man ever to occupy the White House. He was also probably the least temperamentally fit to do so. Nevertheless, as this straightforward biography reminds us, John Quincy Adams (1767– 1848) led one of the longest, most illustrious and most consequential public careers in the nation's history. Remini, the great modern biographer of Andrew Jackson, might seem the wrong choice to write a life of one of Jackson's most implacable enemies. But in this addition to a series on the presidents edited by Arthur M. Schlesinger Jr., Remini, a National Book Award winner, paints an admiring portrait of an extraordinary man. Depicting Adams as deficient husband and father and disputably holding his famous parents largely responsible for the torments in all their children's lives, Remini concentrates on Adams's 50-year public career, much of it spent abroad. Remini is surely justified in holding Adams out as the nation's greatest secretary of state, largely responsible for what we know as the Monroe Doctrine. Although Adams as president was out of touch with most of his fellow citizens, it's likely that no one could have succeeded in the White House given the political confusion of those years. Adams's post–White House years (he was one of only two ex-presidents to return to Congress) yielded some of his life's greatest triumphs. He laid the basis for the Free Soil movement that eventually helped defeat slavery, protected the bequest that gave us the Smithsonian Institution and, as many readers will know from the film, defended the slaves. No one who reads this fine, short study will fail to place Adams in the pantheon of Great Neglected Americans—which is just what Remini hopes to achieve and does.