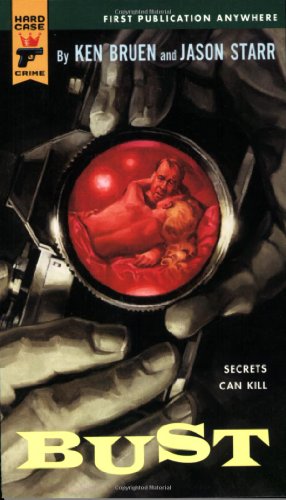 This first-time collaboration between two rising crime fiction writers is a full-tilt, rocking homage to noir novels of the 1950s, taking full advantage of the neo-pulp Hard Case Crime imprint. Wealthy, successful New York City business owner Max Fisher finds himself in a delightfully familiar scenario: he wants to get rid of his nagging wife so he can shack up with his sexy secretary, Angela Petrakos. When Angela introduces Max to Dillon, a former IRA hit man, Max thinks he's found his man; what Max doesn't know is that Dillon is already Angela's man—and the two plan to double-cross Max as soon as it becomes profitable. Dillon, however, proves to be less a professional than a psychotic: he'd just as soon kill "for the price of a pint" as he would for Max's wealth. Rolling in on the action is wheelchair-bound Bobby Rosa, an ex-con with a taste for lewd photography, guns and blackmail. As it tends to do, the murderous plot goes awry, sending Bruen and Starr's delicious, despicable characters scrambling for their money and their lives. A seamless blend of Bruen's dead-on Irish underworld and Starr's hellish vision of the Big Apple, Hard Case's latest release is smart, trashy fun, fulfilling ably the series' irresistible promise.