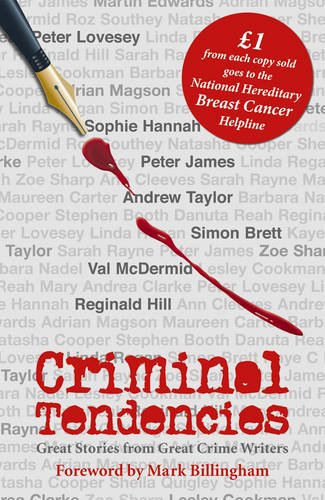 Divided equally between reprints and original entries, this fine anthology showcases many of today's top British crime writers, from seasoned veterans like Peter Lovesey and Reginald Hill to newer names like Zoë Sharp and Roz Southey. The creepy opening tale, Carla Banks's –like “Out of Her Mind,” which features a writer and a knife-wielding killer, contrasts nicely with the humorous story that soon follows, Simon Brett's “Work Experience,” in which burglars plot to rip off a coin dealer's cache stored above a police station. On balance, the 26 selections tend to the scary side, as shown by Ann Cleves's “Games for Winter,” in which a teacher's decision to try his survival skills in a remote part of Alaska has fateful consequences. In one of the book's best tales, Sophie Hannah's unsettling “The Octopus Nest,” a babysitter's chance look at a couple's photo album reveals a stalker. Proceeds from the volume benefit the National Breast Cancer Coalition Fund.