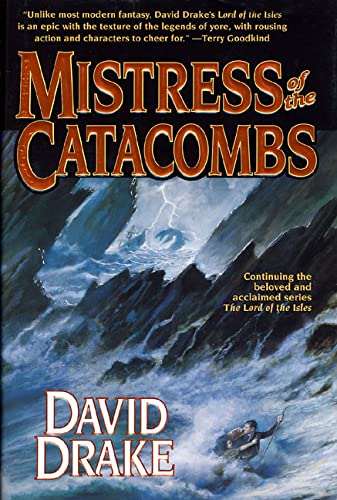 MISTRESS OF THE CATACOMBS

In the fourth volume of Drake's ambitious high-fantasy saga Lord of the Isles (after 1999's ), conflicts continue but few are resolved. Prince Garric of Haft, the first true ruler of the Kingdom of the Isles in a millennium, has mobilized enough swords and ships just when the battle has turned largely sorcerous. His sister, Sharina, tries to cope with rogue and even non-human wizards, while their not-entirely-corporeal friend from the past, Cashel, takes a sardonic longer view of human affairs. Ilna, having shored up her skills and resources in Hell, enters the battle of Magic, while retaining a very earthly regard for the pirate Chalcus, a complex character whom one suspects will die fighting for the side of right. Ilna's nine-year-old ward, Merota, is emerging as a classic brat, rather like one of Heinlein's feisty young ladies translated to a fantasy environment. And, of course, behind the advancing ranks of (largely non-human) menaces lurks the title character, who will presumably be brought further on stage in the fifth volume. Apart from the inherent structural problems of this sort of multivolume work, there is a constant tension between backstory and characterization on the one hand, and between action and the new, well-drawn threats on the other. The result is comparatively uneven pacing, which does not prevent this volume from being a worthwhile continuation of what is emerging as the author's most important work.