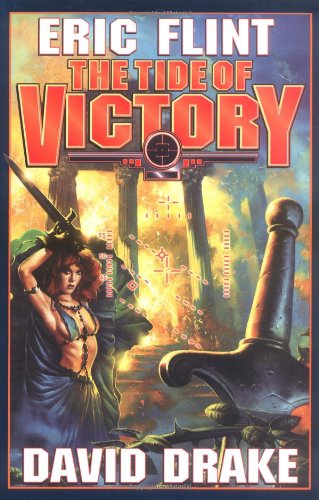 THE TIDE OF VICTORY

High spirits and ingenuity mark the fifth volume in the Belisarius series from veteran Drake () and relative newcomer Flint (), who have devised an intriguing premise and developed it intelligently. Agents from two mutually exclusive futures travel back to the sixth century and begin to steer history in conflicting directions. One wants to mold humanity into a single pattern and is directing a ruthless, fanatical empire based in India but designed to take over the world; the other accepts human diversity and attempts to rally the quarreling nations of Asia and Africa to resist domination. Fortunately, the benign intelligence has teamed up with the Roman general Belisarius, a military genius with a gift for coordinating people as well as army maneuvers. This novel focuses on Belisarius's invasion of India. With all military history to draw on and action scattered across several continents, the story races through many scenes as steamboats launch Greek fire, telegraph lines connect the Romans and their allies and delicious palace intrigues simmer. The far-ranging locations and huge cast of characters may be confusing, but the book does include maps and a long glossary of names, places and unfamiliar vocabulary. More seriously, readers might wish for fewer conferences during which characters cheerfully congratulate themselves on how clever they are. Overall, though, the fascination of seeing familiar tactics applied in unfamiliar situations makes this novel a winner.