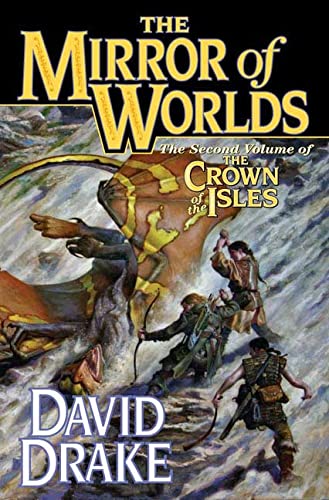 The Mirror of Worlds: The Second Volume of the Crown of the Isles

Three strong women on separate missions dominate this slow-moving middle volume (after 2006's ) in the trilogy slated to round out Drake's long-running Lord of the Isles series. Prince Garric's sister, Sharina, the wizardess Tenoctris and Ilna the witch-weaver face the lion's share of adventure, taking on tasks to help Garric reunite the Isles. The self-effacing Tenoctris must draw huge amounts of magical power to help Garric defeat a new enemy called the Last. Sharina abandons princessly femininity to mount an offensive against a city overwhelmed by the Last while her brother quests after the mythical Yellow King. Ilna, who's taken on the job of personally eradicating the catlike Coerli despite Garric's attempts to make peace with them, faces her prejudices against a society that mirrors her own. While “second book blues” bogs things down a bit, Drake balances it with vivid descriptions and lots of action.