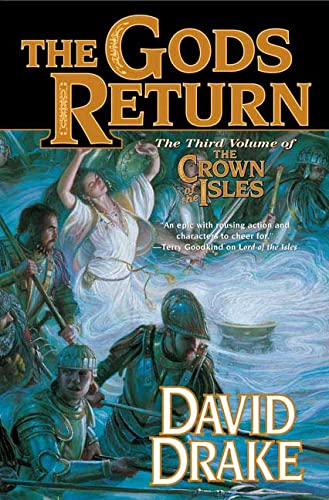 The Gods Return: The Third Volume of the Crown of the Isles

Charming Prince Garric, determined Princess Sharina and rejuvenated wizardess Tenoctris were hoping for a bit of rest after their last adventure (2007's ), but circumstances conspire against them in this shallow conclusion to the Crown of the Isles trilogy. The conquered Empire of Palomir, unable to admit defeat, uses human sacrifice to produce an army of menacing Rat Men. Pirates wield the power of Franca the Sky God to bring forth a gigantic worm that feeds on entire towns, and former priests of the Lady of the Grove are entranced by a mysterious entity known only as the Scorpion King. Facing this triple threat with courage, ingenuity and a bit of fancy wizardry, Drake's heroes often glide too easily through their challenges. Though his characterization of women has greatly improved since the series began, most of the people appear bland compared with the challenges they face.