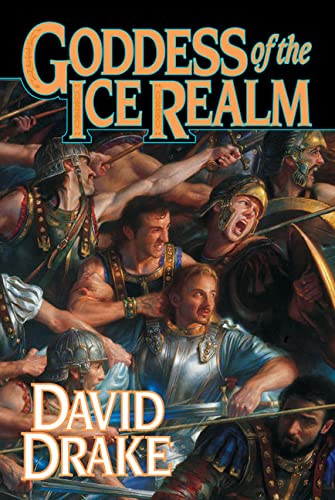 GODDESS OF THE ICE REALM

Best known for his military SF (, etc.), Drake is less adept at epic fantasy, as shown in this overlong, wearying novel, the fifth installment in his Lord of the Isles series. Young Prince Garric, his beautiful blonde sister Sharina, his boyhood friend Cashel and Ilna, Cashel's witch-weaver sister, have finally reached their goal, the island kingdom of Carcosa, from which Garric will rule. If only it were that easy. He must first reunite the many island kingdoms, disunited for a millennium. While Garric battles nasty villains and giant centipedes, Drake drops Sharina, Ilna and Cashel each into trouble on separate other-dimensional worlds. His crosscuts between his different story lines call to mind D.W. Griffith's , in both their dexterity and monotony. Out of the author's inexhaustible imagination come endless dragons, demons and undersea monsters, as well as two more original and memorable creations: Beard, an insatiably bloodthirsty and chattering axe wielded by Sharina, and Evne, an enchanted female talking toad that accompanies Cashel. Written in an accessible style and with only mild violence and no sex, this series is particularly suitable for adolescent fantasy fans, especially those with a lot of patience.