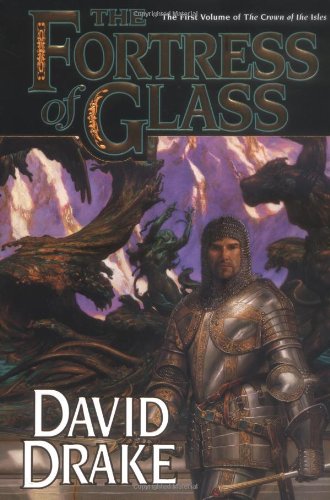 Fortress of Glass: The First Volume of the Crown of the Isles

At the start of Drake's solidly crafted fantasy, the first of a trilogy that will wrap up the author's Lord of the Isles series ( , etc.), Prince Garric is voyaging far in an effort to bring all the Isles under his rule. After landing on a new shore, Garric finds the local king, Cervoran, dead and his heir, the youthful Prince Protas, in dire need of help against an outbreak of wizardry. Before Garric can act, more wizardry propels him to another world, where he enlists the aid of a strange creature called the Bird against the monstrous flesh-eating Coerli that terrorize this other world. When King Cervoran returns to life, Garric's sister, Sharina, and his consort, Liane, must try to settle the question of who rules in Garric's absence. Drake, whose world building has been weak in past books, makes the most of his setting based on the classical Mediterranean world, and he's no longer uncertain in his handling of female characters.